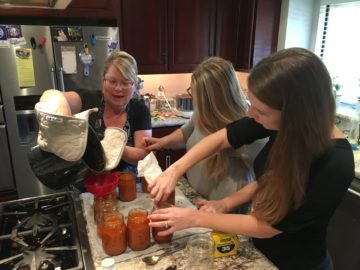 My daughters and I canned last Saturday. It was our first family canning experience. We’ve been saying for years that we were going to do this, and we finally did!

Initially, we were going to make spaghetti sauce with meat and pressure can it. But, when I got out the pressure canner, it was missing parts. So, we went to plan b and made it without meat.

We started with the Ball’s Home Canning recipe for Spaghetti Sauce with Meat. This called for coring and cutting the tomatoes, then putting them through a food mill. We did our first 15 pounds of tomatoes like that, so when we switched recipes we continued with that process for the next 15 lbs.

The sauce needed to simmer for at least 2 hours. Once the sauce was ready, we added it to the jars and put them in the canner to process. Then we celebrated on the back patio while the first batch was processing.

We used pint jars and processed them for 35 minutes.

All total, we made 18 pint jars of spaghetti sauce. Since my canner holds 6 jars at a time, we processed three batches.

Not bad for a Saturday’s work and we had a lot of fun doing it!

Here are a few of my recipes that you can use this spaghetti sauce in: 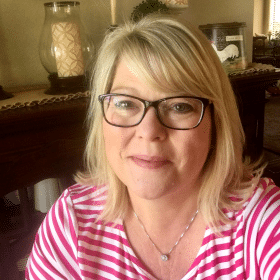